Terrain
The Rāzna National Park covers area of 596km2 and is known widely for its rolling landscape and many lakes, mixture of traditional and modern lifestyle and hospitality of local people.
Terrain full of lakes with clear blue water, typical for Latgale region, a number of hilltops in combination with cultural and historical legacy, makes this area naturally scenic and unique environment for holding the 15th WRC 2017.
Competition area (~250 km²) is located in the central and south part of Rāzna National Park, Latgale upland. Terrain is mainly hilly; the heights are varying starting from 160 m AMSL and reaching up to 289 m AMSL with the highest points - Lielais Liepukalns and Dzerkaļu kalns. Differences in absolute height values play the major role of forming both technically and physically challenging terrain, as the vertical amplitude and relative height of relief reaches over 125 m in the area. This makes the terrain rich of steep slopes and deep depressions: some of Latvia’s steepest hill slopes are found particularly in Rāzna National Park, exceeding even 85-90m.
The landscape of the territory is dominated by big hills among which there are gullies or lowlands with fragmented small hills. The more spacious lowlands and glacial depressions are filled with lakes, the biggest ones being Rāzna (57810 ha) and Ežezers (1065 ha).
More than 70 relatively smaller lakes and ponds are listed in the proposed competition area, really representing the essence of Latgale region, often called as “the land of blue lakes”.
The terrain is partly covered by coniferous and mixed forests with all type of runabillity from very good to overgrown and human non-touched. Typical mosaic landscape of Rāzna National Park is represented with forest areas of different ages, partly by timber felling sites, partly by open fields and meadows and scattered typical farmsteads and villages.
There is a semi-developed network of regional, local and forest roads, but some areas are quite wild, without any roads. Off-road areas may be very wild, low areas around ditches and lakes often are flooded due to beaver activity.

Weather
August in Latvia and Rāzna National Park is moderate warm summer month. It is the second warmest month of the year, with average temperature in between 16-17°C.
During the second half of August it often rains, and weather is characterized by thunderstorms
(observed in average 3-5 days per month, maximum up to 10 days per month). Due to thunderstorms weather can be very variable and changes rapidly. Thunderstorms are sometimes accompanied by strong gusts of wind and heavy showers. Cloud cover during the August is 87% (mostly cloudy). The average probability that some form of precipitation will be observed in a given day is 50%, mostly in form of light rain, thunderstorms and moderate rain. Historical average monthly rainfall in race area varies in between 70-95 mm. However,rainfall and some quite cool August evenings alternate with a warm and sunny weather, when the average daytime temperature can rise even above 20°-22°C. The lowest average daily temperatures in August can decrease to 10-14°C. Some weather and temperature extremes as high as 36°C and as low as 5°C have been observed over last 100 years in August. Typically, after hot month of July and following warm August, moderate warm water in dozens of lakes and rivers is suitable for swimming till the first days of September. 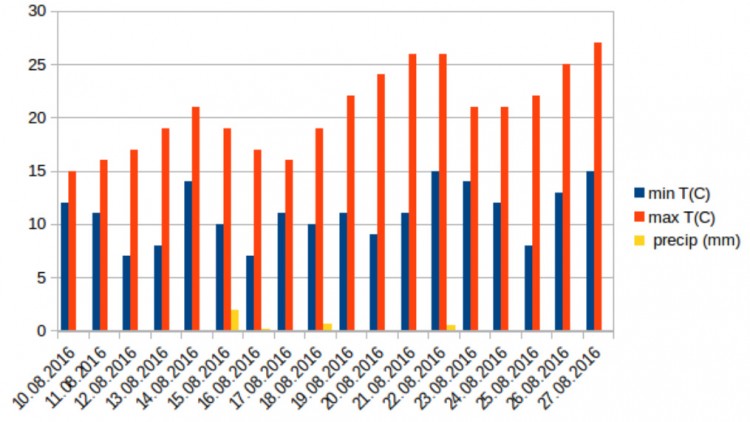 Weather a year before WRC2017

Wildlife, Fauna, Flora and natural dangers
Competitors may encounter elk, deer, hare and fox. You may see evidence of wild boar, beaver in the area. Some of beaver dam created ditches and waterbodies may be dangerous to cross or follow due to hidden sharp wood stem remains and sticks under water or in coastal zone and also due to up to 1 m deep vertical pits hidden in the grass and overgrown banks of beaver acivities’ streams.
Other mammals that are registered in area but are seen rarely are wolf, lynx, otter, marten, badger, polecat, mink.

The only venomous snake in Latvia is common European adder (Vipera berus) https://en.wikipedia.org/wiki/Vipera_berus . Its bite is not highly life-threatening, but nevertheless requires immediate medical attention and application of anti-venom.

There is high risk of tick bite and possibility of very dangerous Tick-borne encephalitis (https://en.wikipedia.org/wiki/Tick-borne_encephalitis) infection during competition, as Event terrain is in area of tick (https://en.wikipedia.org/wiki/Tick) habitat and disease region. Participants must seriously consider risk and take all possible prevention steps. Tick-borne encephalitis vaccines (http://www.who.int/biologicals/areas/vaccines/tick_encephalitis/en/) are highly recomended (vaccination must be carried out several months before competition) as widespread and common disease prevention method used in region http://www.who.int/wer/2011/wer8624.pdf?ua=1.

Altought WRC terrain is located in area, where casies of rabies https://en.wikipedia.org/wiki/Rabies have been registered, there is very minor and theoretical chance to meet infected mammal during the competition. It is suggested not to contact any animals, including dogs, which might be observed in terrain during the race and especially to avoid any contacts with animals with abnormal behaivor.
The same as above has to be mentioned about African swine fever https://en.wikipedia.org/wiki/African_swine_fever_virus. In the meantime, there were no observed wild pig death occurences. If you run across any during the race, just do not get in touch and mark location on the map. After the race let the organizers know this location.

Participants must take care and avoid potentially danger invasive plant: Sosnowsky's hogweed (Heracleum sosnowskyi)  https://en.wikipedia.org/wiki/Heracleum_sosnowskyi which in case of touching and skin contact with plant or splashes of the toxic sap and sap-coated fragments of the plant, may cause burn-like damages to skin and eyes. There is low risk of geting injured in normal competition circumstances if participants do not specially touch, damage, cut or contact in any other way with particular plant. It is suggested to study Sosnowsky's hogweed shape and look before the competition in order to recognize and avoid it during the competition.